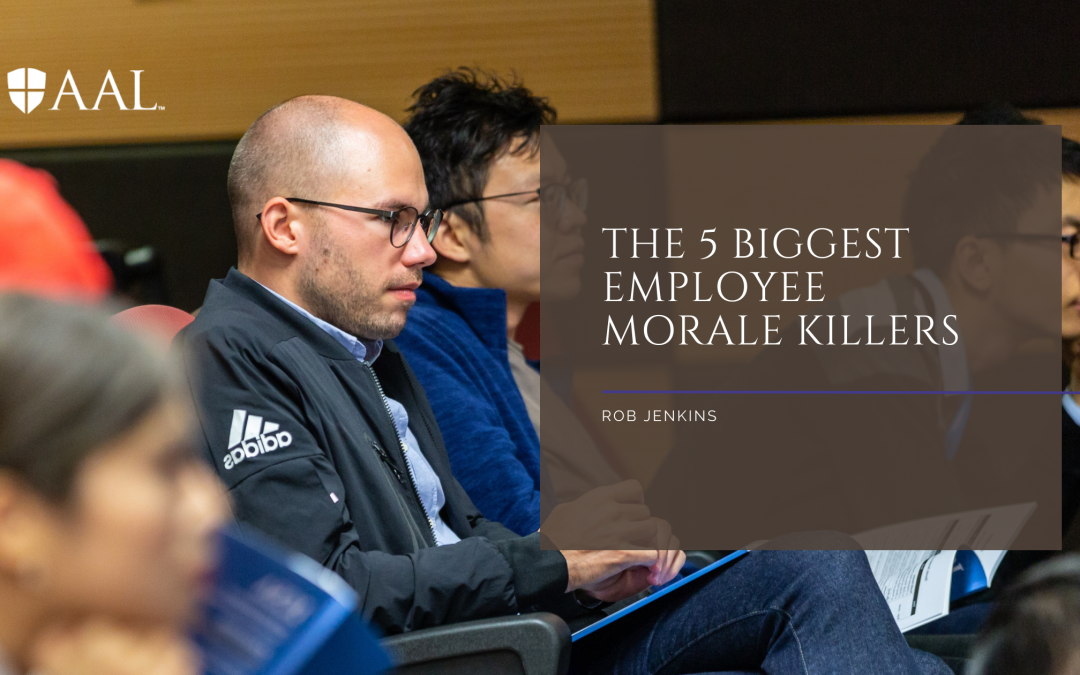 For nearly two-thirds of my 30-plus-year career, I have worked as a “middle manager” of one sort or another. For the remaining third—more than 10 years—I have been middle-managed.

Of course, even as a manager, I had plenty of people above me telling me what to do. I also had people below me who, given the chance, would gladly tell me what to do.

The point is that I know what it’s like to be on both sides of that transaction. Specifically, I understand first-hand what managers can do to make employees’ lives easier—and what they all-too-often do that makes employees’ lives more difficult (dare I say “miserable”?). Accordingly, I’d like to identify, for the benefit of new managers especially, what I consider the five biggest morale killers for employees, particularly in organizations that rely heavily on intellectual capital.

Micro-management. No one likes to have someone looking over their shoulder and telling them what to do all the time, especially intelligent, highly trained professionals. Many of today’s knowledge workers operate so autonomously, due to the nature of their work, that they can easily come to see themselves as independent contractors rather than employees.

From a management perspective, that’s not always a good thing. And yet some employees do require a certain amount of intellectual independence if they’re to do their best work. Clearly, managers are often required to maintain a very delicate balance between supervision and autonomy. Generally speaking, it’s better to err on the side of the latter.

Trust issues. Intelligent employees tend to interpret micro-management as lack of trust. Their leaders, they assume, simply don’t have enough faith in their ability or commitment to allow them to do their work as they see fit. Few things are more insulting to good employees, most of whom are deeply committed to their work and who in many cases know far more about it than their managers.

Of course, trust is a two-way street. To be happy and productive, employees need to feel that their managers trust them, but they also need to believe they can trust their managers—to be open and honest, to follow through on promises, and to have the best interests at heart.

In my experience, an organization suffering from low morale is almost always one where employees do not have that kind of confidence in their leaders—where trust has been broken.

Hogging the spotlight. When an organization succeeds, that is rarely attributable to any single individual. And yet it’s natural for leaders to want to take much of the credit, for several reasons: they’re the ones in charge, after all, so the success must be due to their great leadership; they need such documented successes to solidify their positions, not to mention pave the way for future promotions; and they often take a disproportionate share of the blame when things go wrong, so why shouldn’t they take most of the credit when things go right?

Such thinking may be natural, but it is anathema to a smooth-running organization. Leaders must embrace a number of behaviors that don’t necessarily come naturally, and one of those is deflecting praise. Effective leaders know that when their organization succeeds, they have succeeded, and they are content to spread the credit around while taking little or none for themselves. (Think about Tom Brady at the post-game press conference following a big Patriots win.)

Ineffective leaders sabotage morale and create a toxic environment by taking most of the credit for themselves, whether they deserve any of it or not.

That can be very difficult, especially if the failure really wasn’t their fault. Effective leaders understand, however, that just as they succeed when the organization succeeds, they also fail when the organization fails—whether or not the actual failure was their own. So they square their shoulders, accept the blame and accompanying criticism, and resolve to do better in the future.

(Note that “doing better” may well involve some very intense conversations with the people who were actually to blame. But those conversations should be kept, as much as possible, behind closed doors.)

Weak and ineffectual leaders, on the other hand, are always looking for someone else to blame. Nothing is ever their fault, even when it clearly is. I can’t think of a better recipe for destroying morale in any organization.

Blatant careerism. Finally, we come to one of my own personal pet peeves: leaders whose sole ambition in life is to climb as high as possible on the executive ladder and who are willing to do literally anything to achieve that ambition.

Okay, maybe not “anything.” I’ve never known a manager who committed murder in order to get a promotion, although I’ve known a few who probably thought about it. But “anything,” in this case, can definitely include throwing the people they lead “under the bus,” as the rather graphic colloquialism puts it—pointing the finger at others when things go wrong in order to inoculate themselves against blame and ratting people out for minor infractions in order to ingratiate themselves with the powers-that-be.

“Anything” can also include using the people under them as stepping stones for their own ambitions—taking credit for their achievements and/or giving them make-work assignments that do little more than enhance the leader’s own resume.

I once worked for someone exactly like that. I used to duck into the men’s room anytime I heard the distinctive clip-clop of her high heels coming down the hallway, because I knew any “casual” meeting would result in a new project for me, the only purpose of which was to make her look better in the eyes of her superiors.

That’s no way to build morale. In fact, that’s exactly how you kill it, along with micro-managing, breaking trust, hogging credit, and deflecting blame. Leaders who behave that way, in my experience, might enjoy some apparent success in the short term but will rarely succeed over the long term, partly because they don’t usually last that long.

Of course, that’s not the only reason managers should try to build morale rather than destroy it. Effective leaders try to create a workplace where people are comfortable and fulfilled, where they feel valued and believe what they’re doing has meaning. People in that situation are likely to be more productive, making the organization a success and creating plenty of credit to go around—even for a leader determined to deflect as much of it as possible.